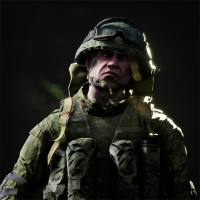 tl;dr: Replace the FOB Radio with a larger functional structure

The Radio is as small and vulnerable as a 100 Construct Point Ammo Box. Yet it is supposed to be the most vital part of the Forward Operating Base.

It feels like it was a placeholder asset that hasn't fully evolved with Squad's development.

What I propose is changing the Radio into a "Command Center" (the name can be whatever). This structure would be roughly the size of a HAB and have the same damage vulnerabilities that a HAB does. I envision it being made up of sandbags, the radio and some sort of tent or meshing over the top (similar to the FOB in Project Reality), obviously the aesthetics would vary by faction.

It would still emit noise, as it has the existing radio within it.

What does this accomplish?

Ideally, there would be something for Squad Leaders to do in this structure as well so that it sees a bit more traffic to help facilitate the second point. Perhaps this Command Center could feature an ammo crate inside of it, as that would give a consistent place to rearm on any FOB.

Either way, looking forward to the community's thoughts and discussion on the topic.