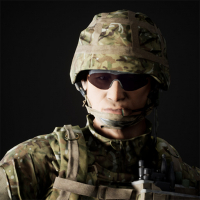 Just confirmed the Leopard MBT for Canadian side was invincible to impacting rounds and shells from enemy vehicles. Only component to take damage was the Tracks.