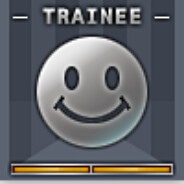 Can a Russian scope be enhanced? Make his magnification larger and the black frame smaller (for new camps such as MEA, USMC, etc.) please：）