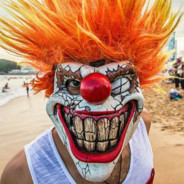 AMD developers have published the source code of FSR 2.0 (DLSS analog), I would be grateful, as would many other people, if they would add FSR 2.0

To promote this topic - post here everyone who wants to