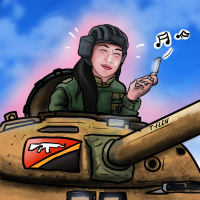 For appeals, chillin' with the community, and the most up-to-date information, join our discord:

Rule 1: Chill. We promote strategy and coordination on our server. Some people will prefer casual play styles while others are intense as can be. Work together, we are all capable of doing so.

Rule 3:Friendly fire is common and often unintentional. Please apologize for teamkills whenever possible in [ALL] chat. Intentional teamkills and teamkills followed by disconnects are punishable. Sabotage and trolling are also subject to punishment.

Rule 4: Cheating and glitching are strictly prohibited. Purposely exploiting the game’s flaws and seizing an unfair advantage ruins everyone’s fun, and are consequently banned for. Ghosting is bannable and is defined as giving any information, i.e. friendly positions, HAB locations, and armor locations, whether the information is true or false or switching teams to attack a location using info from the team you were previously on.

Note: Heli ramming is considered sabotage. Do NOT heli ram.

NOTE: If the point is close enough to the main, we will change the main protection zone to 150m.

NOTE: If you are inciting engagements within 400m of a main, you are main camping.

Rule 6: Crewman vehicles require at least TWO crewman in the vehicle BEFORE leaving main besides the RWS Bulldog. Crewman vehicles can be claimed for FIRST LIFE of the vehicle via naming your squad for that vehicle. All vics after death are first come first serve. Tanks are limited to ONE SQUAD. That means ONE SQUAD PER ONE TANK. One squad cannot claim TWO TANKS. Do not over-claim other Squads (Do not take vehicles they have claim for)

NOTE: One squad can not take multiple crewman vehicles.

NOTE: Heli Squads have claim ALL game unless an admin believes the person is wanting to play on a test range/gunship and does not help the team.

NOTE: NAMING YOUR SQUAD ARMOR DOES NOT COUNT. It needs to be specifically named for the vehicle you are taking. For example, it could be named IFV or BTR.

NOTE: Emplaced/boxed in vehicles only need one crewman. For emplaced vehicles, they need to be boxed in on three sides and unable to move. Otherwise it is not emplaced and action can be taken to prevent one-manning.

Rule 7: FULL (9 man) infantry squads have priority claim to ONE LOGI all game. No one squad is allowed to have more than one logi unless the team permits it.

Rule 8: Squad leads can kick for any (non-malicious or rule breaking) reason. Squad leads need a mic and kit. Infantry squads cannot be locked IF there is no room for anyone else to join a squad.

NOTE: Squad baiting will lead to a ban. Do not create a squad just to get a certain kit other than squad lead or leave instantly after creating the squad.

Rule 9: Mic spam (at any point) isn’t allowed. Loud noises and music falls under this one.

Rule 10: Use of the unarmed kit counts as trolling/sabotage.

NOTE: All rules are subject to change based on staff and community feedback. Thanks for playing Baja Boys.

Rule 11: Any action deemed harmful to the server/community may result in a PERMANENT removal from the BAJA community

We are able to seed on CAF Basrah v1, v2, and v3 but the concept will remain the same

Defending team will FOB Al Khora, Attacking team will set up an attack FOB just north of Al Khora and no mortars will be used.

LOGISTICS VEHICLES ONLY! No crewman vehicles AT ALL. Scout vics may ONLY be emplaced.

DO NOT DIG DOWN HABS OR RADIOS! The only objective is to fight until the server reaches 36 players

List of maps with SH (shortmain) rule enabled is in the discord.