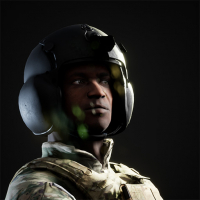 I think some improvements can be made to the Helo’s and co-pilots in squad. So here’s a list of them: