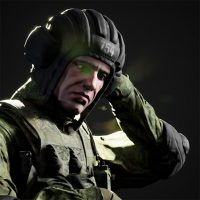 Throughout the years of playing squad since day 1 of release in 2015 the game was something that had potential and would always be on the back burner when not played as development was undergoing. (Having 6319 hours in game as of time posting) Ive seen the game go from running Sim to Rally running to eventually vehicles and fobs I've watched the game go from a turkey shoot to something with actual tactics and cooperative gameplay and team play.

Recently in the latest of patches we have received a lot of new factionsto the game, with the most recent PLA to the marines and the Aussies and so on. Seening how all these new factions have come along and have been integrated into the game you can see a trend in the balance between them. With the Chinese having amazing armour and good all around classes for their squad we can see a slight power creep thus far and their guns being a bit bouncy, which is to be expected as further balancing will be implemented eventually. But the main point is that we have some older factions in the game that seem to become more mediocre as time goes on, from not receiving any real buffs or upgrades or TLC these factions just start to lack behind in all aspects compared to the new ones. Where as there is something from old fractions that are just incredibly busted "bradley I'm looking at you" seems that with the new factions we get some new vehicles, emplacements, guns and overall gameplay, but the main issue is that the old factions don't really get anything to combat these new things. For instance the BMP2 over heats and does extremely poorly vs a Bradley or a Lav just due to its main cannon overheating extremely fast for no reason. Yes you can make the argument that the ATGM can kill those easily, and yes it can in most situations. But seening how China has come to the game and gets what is essentially a BMP3 on steroids it just puts that BMP2 to shame in all aspects. Moving on to balancing 30mm for Russia and China seem to not really be doing much in terms of damage compares to the smaller slower firing 25mm or the nasty 40mm on the warrior which is insanely over powered in almost any engagements. They need to do some rebalancing or adding new vehicles to fix these struggles of power, otherwise it just feels like a chicken shoot where ya walk out and hope for the best.

Russia being one of the main factions that's been around for a long while it's recent TLC of amphibious was nice, the with MT-LB logi has almost 0 chance against say a AAVP-7A1 due to vehicle stats being different. Middle East also suffered from having lackluster equipment and vehicles, being basically a russian reskin it should have some other special fraction specific qualities like double rally, or spawning on team mates rally.

As for Russia, maybe give them either new vehicles like BMP3 or T90m or T80bvm "reverse speed balancing" or simply buff 30mm or just rework the faction overall by giving them specific features like their Kornet having a True 5km range instead of being the almost the exact same drop off as Tow if not the same. Give if more penetration to make it more balanced seeing how the game doesn't us ERA on any vehicles as its just calculated as RHA. Another way they could go around would be giving Russia an static artillery employment like the we already have in game such as mortars, giving Russia 120mm mortars or even 122mm artillery pieces or 152mm making the faction of a turtle as it is almost always on the defense in invasion and especially in amphibious assaults, where once again a single Btr 82 vs a Lav has almost 0 chance, and Btr80s, don't make me laugh when they get 7 shotted and back to the spawn screen. Older factions like US army is also lack luster currently having only 3 shot burst M4s, which is highly accurate and good and really op in certain situations, but compared to jast full auto close engagements you usually feel on the weaker side as to compensate you need to spam which can Mag dump extremely fast and only kill a few people where as the guy full auto can tag an entire group in a row and just clutch out some fire fights. Other issues are the insurgents and just having bare bone weapons. Like they couldn't get a scope or a ATGM off the blackmarket or just wait for the CIA to drop them brand new weapons to cause more fighting in the countries. Jokes aside, there is just a real struggle for balance in the game and you can say it's reliant on skill of the players and the map or whatever, but what it really comes down to is the equipments, the location and the ability to use the equipment. For instance the T72 has no gun depression and on a map with lots of hills and valleys its not going to do well compared to a challenger. And other instances where there are rivers or ocean the Btrs can float across where as the bradley will need to drive, just makes a show of how equipment can change the entire skill scenario. So it would be nice to see some buffs to our old beloved factions that were the foundations of which the game was created off of, or maybe some nerfs to factions or just overall more balancing and tweeking to fix the issues with equipment being lackluster.

Just my thoughts, bring mainly a armour main because I can't stand the imbalance of CQC with guns that are just not balanced enough to compete with other guns like Aussies, "yes I know it's an infantry focused faction" then again my point still stands implement more nation backed doctrins, like artillery or more armour or aircraft etc.