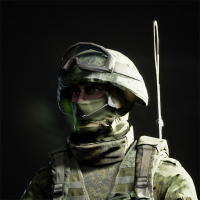 I've been playing squad for a while, and I wanna propose these, maybe they'll be good, maybe not.

Among Russia, US and Canadians, the Engineer carries a lot of kit, too much even. I'd like to see the class split into 2 options with differing kit, like the aussie one.

These could be Claymores, with the Russian counterpart being the MON-50

Honestly 1 demo charge is only good for killing FOBs, Vehicles take 2, sometimes as many as 5 demo charges, adding one more would be beneficial and allow the kit to not feel empty.

The mine detector could be a passive addition, add maybe a bleep to the engineers experience that goes off when within 5m of an enemy explosive? Otherwise maybe make it a piece of equipment that has to be equipped?

Rifleman: Bring back the sandbags, they were super helpful, conventional armies use them all the time and it used to be the standard in squad that all non-specialist infantry carried sandbags, it made the fights much harder and more intense

This could be a command class, give it basic rifleman kit, less the grenades. The only perk would be increased speed for loading/unloading supplies. This role would be useful on both helis and on the ground. Given how a lot of servers tend to have a 'logi squad' this could utilise the logistics aspect of gameplay to be more of a game focus.

This is a small array of microphones featured on vehicles and fobs in real life, it is used to listen to the 'snap' of rounds coming in overhead, it uses the array to detect the direction of incoming fire. It would be useful to have some sort of boomerang infra that could be built on FOBs to assist in target detection. Limit it to 1 per FOB so it's not too accurate and then this should make fighting FOBs more strategic. This tech is prolific and lots of folk use it. I'd be surprised if Russia and China don't have their own already.

Just some musings I've had while playing squad.