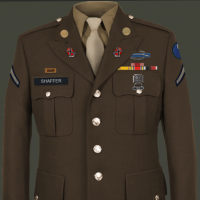 So the SL has a lot on his or her plate. so to lessen the stress for the SL can we have a FTL request button in the deployment map or a keybind/hotkey to request FTL. It would work like this if anyone wants FTL (Because FTL is the only way to mark targets or marks for ranging) the player can go to the deployment map hit the request FTL button or have it as a hotkey/keybind to request FTL and the SL will see the FTL request come up the same way SL's get request for someone in the squad to use a vehicle and all the SL has to do is Page up (accept) or page down (deny).

This way SL can focus more on leading and marking targets and talking to Command chat with out opening the deployment map and asking who wanted FTL again because the SL is not focusing on the bottom corner of his or her screen to see who asked for FTL which by the time they get there FTL the target they wanted to mark has moved because passing FTL is a slow process. also there are times SL's get shot in the face while doing this.

I know there is a Commander, Squad Leader, Fire Team Leader overhaul come at some point in the future its best to collect the ideas now. So please make leading roles more easier to handle. I'm sure there are other ideas for SL and FTL changes from the players i wish they would share them here in the comments. Pick our brains to make a better Squad.

Marking targets without a SL or FTL role would be nice too like what Hell let loose has not leading roles marking target locations and report to your SL what you seen so that SL can put down the right markers just a thought.